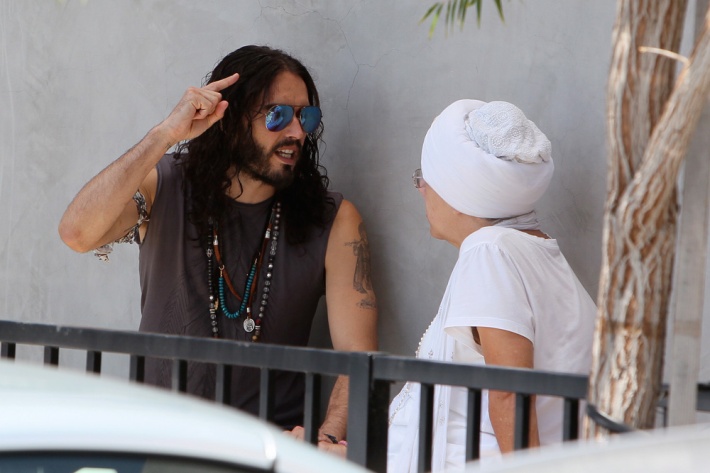 Fresh off the pro-union train, yogis were caught by surprise when it came to light that freaktastic comedian, Russel Brand, staged a walkout in support of his fav Kundalini Yoga instructor, Tej, who, rumor has it, wanted to quit Golden Bridge, but was, presumably unfairly, locked in a contract.

Radar Online has got the whole story:

“‘Russell absolutely adores Tej, and she has become something of a guru to him,’ an insider tells Radar. ‘They are the best of friends. They meditate together, they hike, they go to vegan restaurants together, and Russell took it very personally when he found out that Tej wasn’t happy at Golden Bridge. Tej told Russell that she wanted to quit teaching at the studio, but claimed they wouldn’t let her out of her contract. That made him spitting mad and he vowed to take action on her behalf!”

Russel and Tej just chillin’ (at the MTV Music Awards)

Russel’s own words truly capture the bubbling activist that resides in every peace-loving populist yogi:

“‘Golden Bridge is not treating my friend in a respectful manner,’ Russell charged. ‘After years of dutiful service, they refuse to let her out of her contract. If you’d like to continue to study with her, follow me!’ An eyewitness says the crowd shifted nervously for a few seconds, wondering whether or not they were being Punk’d, but soon enough, at least half of the class, [Demi] Moore included, rolled up their mats and followed Russell right out the door!”

Of course, there are two sides to this twisty tale, with Golden Bridge denying any contract squabbles taking place.

Our inside scoopers inform us that things at the Golden Bridge megaplex haven’t been peachy in years. Something about Golden Bridge higher-ups being none to pleased with sharing the spotlight. Something about higher-ups traveling for much of the year and other long-time committed teachers getting understandably popular and higher-ups coming home and not being psyched about that. There’s also been reports of students canceling their Golden Bridge passes after the jump by Tej, who is also reported to have taken the Kundalini as Taught by Yogi Bhajan teachings back to the people by offering classes out of warehouse spaces. That said, neither Tej nor GB were available for comment. So, you know, take all that with a grain of anthrax.

Nevertheless, at the end of the above article a commenter with the handle “natures candy” put the whole mess into pristine perspective:

“It’s this kind of thing that makes me lose what little curious faith I have in the centering and self-improving properties of these kinds of activities. I mean, If I were to go to yoga, it would be to calmly and peacefully try to eliminate the small part of my lizard brain that tries to make me act like Russel Brand. If Russel brand does this much yoga, and is still full on Russel Brand, then Yoga is just not looking like a good investment for mental and spiritual health. Although I guess I’d have to see a control group Russel Brand…”

Eh, but Russel can’t be that bad. You have to admit, Brand can be pretty funny as fuckin’ hell when he’s not being cracked out and…well…actually…that is when he’s being ridiculously funny. And, let’s not forget his skewering of the Westboro Baptist Church, home of some of the most awful human pieces of shit ever born (note that the link to the WBC site reads http://www.godhatesfags.com. You have to give them credit for clarity):

And, for this I can forgive Russel’s perpetual über-schtick.