Hey. Ever seen or heard of the Gadsden flag?

“The Gadsden flag [ed. created around 1775] is a historical American flag with a yellow field depicting a rattlesnake coiled and ready to strike. Positioned below the snake are the words ‘Don’t tread on me’. The flag was designed by and is named after American general and statesman Christopher Gadsden.” (Wiki)

Despite it’s no BS declarative stance, the Gadsden flag ironically acts as an almost neutral symbol, able to be appropriated by a wide breath of, sometimes very differing, voices. Metallica, the US Navy, Futurama, The Cro-Mags, The Tea Party movement, as well as Nike have all made use of its message. In a way, it’s the tofu of all flags, taking on the sentiment (taste) of whatever context (stir fry) it is placed in (saucepan). 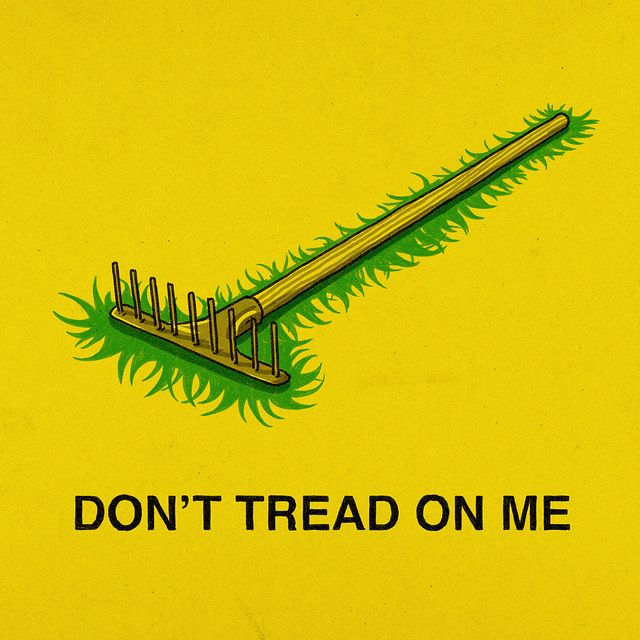 And yet, nowhere has its sentiment been more silently embraced than in the hands of money-minded yoga teachers who claim time and time again that the tradition of yoga is not only “owned” by no one, but in effect a neutral signifier in waiting. Waiting, of course, to be used to fill the pockets of anyone with a younger brother who while eating Thanksgiving turkey thought aloud, “Hey, sis. You should do that! You should take, like, a yoga trip to Spain and do, like, a ‘Yoga & Tempernillo’ tour! Call it ‘Yogavino!'” Which is why we went ahead and made a flag fit for all of ’em.

That’s right, commercial yogis and yoginis. Now you too can have a flag all your own! Hang it in your dorm room. Put it on a T-shirt. Fly it at a Yoga Journal convention. Silk screen it on a pair of low-rise panties and wash Harleys on a street corner. The options are endless!