First, let’s get this bio out of the way:

“Deva Premal & Miten began their journey into love and music in 1990 when they met at the ashram of controversial Indian mystic, Osho. Their worldwide concerts and best-selling albums  have since introduced millions of Westerners to the joy and deep relaxation found in spiritually based songs and chanting mantras from the Eastern meditation traditions.”

I’ve known about something called “Deva Prema & Miten” for over a decade now, and have always just written them off as lame. Mostly due to the way they look:

I’m of course biased, because I was raised to think musicians should look like this:

Or, at least this:

And, then I came up this:

I know it’s supposedly “bad” of me to have stoked the fire of superficiality, but let’s get a few things straight. As far as I can tell A. this site deals largely with engaging the facades of the commercial yoga, B. the facades of commercial yoga culture are be definition superficial, C. I’ve got pretty good lame-dar, and D. I can sometimes be a jerk just like everyone else.

Anyway, when I came across this ad in the latest issue of Shit Journal (ironically while dropping a deuce), I was reminded of why I never listened to them…. Oh…. You want me to list the reasons? No can do. Too many.  But, let’s just say that when I look at this “band photo,” I wonder if Deva Premal, who I’m guessing is the lady, just had a psychotic break, and when the photographer said “Say cheese” she turned toward the camera, and froze. Not, like, “held a pose” froze. I mean, she actually froze in place, ne’er to be thawed out again. [Ed. link is to be viewed only if you are comfortable seeing frozen dead bodies along Mt. Everest. You have been warned.]

And, why is Miten (that’s the grey-haired guy, right?) wearing that thing consoling everyone? Is that a sari? A toga? Am I supposed to assume he’s a sadhu? Or, is that the old “sanyasin” garb from the Osho days?

Sanyasins listening. I’m ok with this. 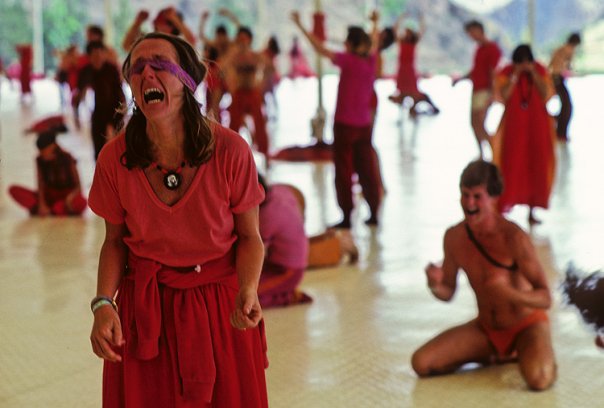 Sanyasins purging. I’m ok with this, too.

Anyway, the point I’m trying to make is that depsite all this neggie neggie I was feeling, I thought I should actually listen to them. So I Googled a video for this tour, and low and behold, this is what I came across: