Is Yoga Advertising and Branding An Inherently Skewed Power Dynamic? 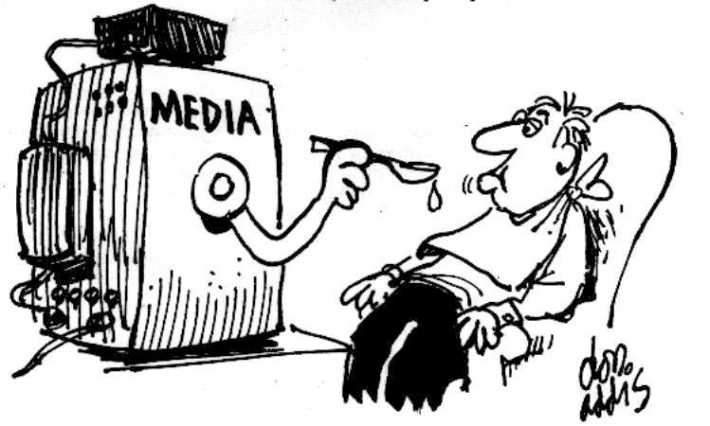 Lets, for shits and gigglies, apply to yesterday’s post this delicious quote from late French postmodern theorist, Jean Baudrillard. (You know, the guy who wrote The Gulf War Did Not Take Place):

“[The media] are what finally forbids response, what renders impossible any process of exchange…. [P]ower belongs to him who gives and to whom no return can be made. To give, and to do it in such a way that no return can be made, is to brake exchange to one’s own profit and to institute a monopoly.”
—From Jean Baudrillard, “The Masses: The Implosion of the Social in Media”

Here, Baudrillard states that when humans interact with media, power ultimately resides on the side of the giver (media), which creates a passive (ineffective) receptacle out of the viewer. This media-human relationship stands in contrast to the human-human relationship that allows for (at least the possibility of) a more co-creative environment where both parties are involved in active participation.

The concept of immediacy is significant here, as one could easily argue that responding to media happens all the time in the form of critique, reviews, etc. However, what media does best is to defer a person’s response to a later time since talking at a television does little more than leave you talking at a television. There is no engagement with the critique or review on the media’s part. As Baudrillard states, there is no “exchange” when it comes to relating to media.

On a personal level, people experience this skewed power dynamic any time a person is done well by another person and yet is not allowed to repay the favor. Perhaps you have experienced this yourself. Someone gives you a lavish gift and refuses to allow you to buy him or her dinner as a reciprocal gesture. It’s weird. Its awkward. Something about it feels wrong and slightly aggressive. Baudrillard’s critique of the media suggests that this is actually the dynamic set up by mediated images, representations of human interaction, manufactured communities, and, I might argue, celebriyogi culture.

Some spiritual traditions, notably the Sufi tradition(s), discuss this reciprocal courtesy, though in markedly different ways. In Islam, giving of oneself to another person, serving a guest, is considered a very high form of adab, or decorum, decency, and good manners, rewarded with any number of positive vibes by Allah. In fact, in Islam it is widely considered bad manners to refuse to allow another person to do a good deed for you, as that would in part prevent this person from receiving the blessing from doing so.

As the Qur’an states:

“When a greeting is offered to you, meet it with a greeting still more courteous, or of equal courtesy. Allah takes careful account of all things.” Qur’an, sura 4

Or, the oft not cited:

“Those who spend freely, whether in prosperity, or in adversity; who restrain anger, and pardon people; Allah loves those who do good.” — Qur’an, sura 3

And yet, while many yoga people are so hyper sensitive about anything that even suggests they should do anything specific about anything lest it be considered a form of dogma, I can’t help but once in a blue moon wish the yoga “world” would adopt a handful of specific codes of conduct that might in turn lend themselves to being used as solid critiques of mediation and rampant commercialism. Yes, there’s the yamas and niyamas, but seriously, who really even knows what they are by heart anyway?

I tell ya. Give me some of that ol time relijun any day. Gets me ol’ spirits a quickenin’!