While it certainly took some effort (namely a guarantee of meat, rum, and figs), The Babarazzi has persuaded a little known sect of miscreant mystics to come out of their respective studio hovels and offer their two to four cents now and again on matters yogic, cultural, and contemporary. We call them “The Five Friends Magnificent of the Post-Urban Region,” and have reason to believe they are all wanted for one crime or another. “The Five,” as we know them for short, are a frightening pleasure to have in our midst.

Their role will be to provide perspectives both unruly and contradictory, slaying and salvatory, dark and light. They may pop up at the end of an article with a snippet of inappropriate wisdom, or, if the price is right, may be convinced to compose something entirely of their own. You never know with anarchic types. And yet, although they make us slightly nervous, for this simple fact we are forced to listen.

Introducing MS. RECLUSE. Know her as “shadow finder,” “occult window washer,” and “tight-rope walker.” Her perspective can be sweet as spring dew, and as unapologetically filthy as a trucker strung out on Yellow Jackets. She brings pomegranates to potato-salad-making contests, and considers the changing of seasons to be the most rebellious act of the year. Yoga is her civility and her response to it.

Introducing THE BLACK WIDOW. “Knower of too much,” “fashioner of moody clouds,” and “popper of balloons,” the Black Widow is a watcher of people and a crafty player of games of chance. What she-he witnesses he-she calculates. What she-he calculates he-she speaks. Those that call The Black Widow “clever” have rarely lived to tell the tale, for she-he invokes weather that sets men adrift. Yoga is its method.

Introducing HOBO. He who is “careless of carefree-ness,” a “giver of found objects,” and a “barer of bad news.” Your poison is his potion, and his passion is your poison. He bares the marks of crusty men and the jewelry of forgotten grannies. Wild-eyed and delirious, he skips jubilantly to a silent tune. Rumor has it he can speak to crows, that they listen, and that they respond. His collection of nests is a testament to his legend. Yoga is his formula. 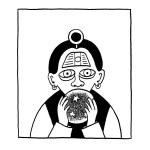 Introducing ORB WEAVER. “Spinner of the great mirage,” “hocus pocus punk,” and a “medicine of careful ingestion.” Her language knows no formula and her belly is filled with stars. Resident oracle of The Babarazzi, Orb Weaver is keeper of the old books and a fashioner of twisted keys. Her tongue she hides like a shy snake, while she feeds in low lit corners. The threshold of her home has been breached by many, though all keep her secrets. Yoga is her question and answer.

Introducing TRAP DOOR. Known by many as “the great escapist,” a “shape shifter,” and “maker of foggy weather.” His tools he carries in a sack on his back. Reach in and you may wonder what tiny beast has stolen your watch. It is said that his eyes were given to him by the sea, and that a mermaid once whispered in his ear as she fumbled with the clasp on her necklace. It is said that he carries her final breath in one of his many pockets. Yoga is his treasure.

Thank you, The Five, for paying attention to things you’d rather not. We, The Babarazzi, welcome you and your unpredictable ways. Please don’t flake out on us.